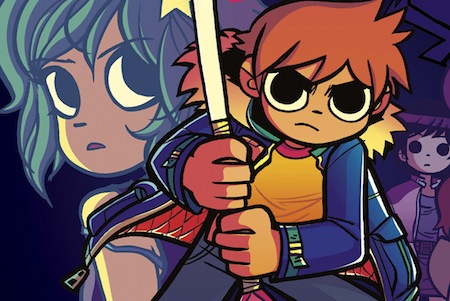 A version of this entry appears on http://www.geekscape.net

A quick primer on Scott Pilgrim:
For those of you who haven’t had a chance to read the series, the concept is simple, Scott is a care-free slacker in his early twenties, who meets a girl one night named Ramona. In order to be able to date her, he must defeat her seven exes. Over the course of the previous five volumes, we saw Ramona and Scott relationship progress, falter, and progress again, and Scott, being encouraged by Ramona (or trying to impress her?) works on getting his life together. Throughout the series fantastical elements are introduced– Ramona can travel through ‘subspace’, Scott has elements of video game characters in him (the battles with the exes often turn into a video game like productions, with the defeated exes, much like the Gomba’s in Mario Brothers, giving up some random coins that serve no purpose to the story).  At the end of volume five, Scott had defeated six of the seven exes and the last of Ramona’s ex-boyfriends, Gideon awaits.

I’m terrible at writing reviews, but I’m good as editorializing and essay writing.  What follows is a review of volume six, which slowly turns into a discussion about  ‘What Scott teaches us’. Except for the content of the last pages, I’ve spoiled nothing in the following.

Reading volume six, I realized that it had been a long time since I read volume five, and as a result I found a lot of the story suffered for it. That’s not to say this was a bad book— it is far from being bad. I’m just saying to truly appreciated this series it needs to be read as a whole, which is something I plan on doing before the movie is released.

My only complaint of the story is that it depends on the sci-fi elements from the earlier volumes (namely subspace) and I still really don’t see the purpose this device serves for this whole series.

Yes in a series that has epic sword battles, ninjas and video game style fights taken as being ‘real’, the concept of subspace seems out of place to me.

Overall, O’Malley has woven a tale that on the surface seems to be about video game culture, music, love, and imagination. And this is the reason that Scott Pilgrim has captured an audience, it is that this is one of the first stories to have a protagonist that adequately represents what many of us born in the 1980’s and later are, a amalgamation of a variety of pop culture sources.

Painting our generation (and subculture) with broad strokes, we are a group that tries to imagine and make video game elements fit our lives. We are also a group that is CURRENTLY defined more by what we consume than what we produce and many of us, live in a state of arrested development. We refuse to grow up. I’m one of this many.

But the story of Scott Pilgrim is about how we can, and in order to ‘level up’, need to change that.

As mentioned earlier I binged read the first five volumes over a year ago, and am ashamed to say it, but the theme of the exes representing the baggage that we find in our relationships was something that didn’t hit me until now. Each ex represents an idea of love that Ramona’s had at one time, and through his fights, Scott separates himself from them– he physically proves that he is better.

But why doesn’t Ramona have to prove herself to Scott? Scott has had almost as many past relationships as her. What differentiates Scott from Ramona is that he simply refuses to have baggage. When a relationship ends, thats it, he moves on. Often Scott has been portrayed as someone who ‘forgets‘ things, but in fact he doesn’t forget as much as re-writes his history to prevent himself from having emotional baggage. This volume directly addresses Scott being an unreliable narrator, as he is confronted with his version of events, and the true version.

As unhealthy it is for the relationship to have Ramona to compare Scott to her exes it is equally troublesome that Scott doesn’t fully know what he wants beyond his base instincts as he refuses to make comparisons / learn from his past experiences.

Scott also allows everything (friends, music, video games) to define him, while Ramona mainly allows these past relationships to define her. Envy Adams, another character allows her managers to define her, and Gideon’s anger at his past failures is what define’s him. Volume six shows us that this question of how we define ourselves, is the core theme of Scott Pilgrim.

By the end of the story, both Scott and Ramona realizes that at some point we have to start to find out who we are, and make what we find the main thrust of our character instead of reflecting the dominant culture’s values, and our the content of our past relationships. Once we learn to let go, and accept that we may not know what is next we can finally become our own person. This is what it means to be an individual, and this is what it means to grow up, or in video game terms, level up.

So how does it end? Does Scott get the girl? Does he become an ex and end up joining the league? That’s for you to find out, but I’ll tell you this about the end, it ends with a series of blank pages. Over the course of the series these characters, both major and minor, are flushed out and in turn become real. I like to think that when I closed the book they will continue having a life, just one I’m no longer a witness too. The’ve grown up, and find that the next step in their life isn’t written– its in fact a blank page.

There is something deeply comforting about that.